2D games are often overlooked in today’s 3D rich world. Many forget that not all games looked and controlled like they do today. Dust: An Elysian Tail proves that this art-form has not died. It is alive and well and just as capable of providing entertaining gameplay and a heartfelt story as much as any big budget 3D game. What’s amazing is that Dust was designed and programmed entirely by one man, Dean Dodrill; who also happens to be self-taught. While the game has its flaws, as all games do, you quickly forget them in favor of the fun elements of being in the world of Falana and guiding Dust on his quest of self-discovery.

The story of Dust is a beautiful heart-warming tale about a warrior who goes on a journey to discover his past and regain his memory. He is joined by Fidget, a flying squirrel-like creature who provides the game’s comic relief and charm. Upon waking to discover he has no memory of himself, he also meets the sentient sword Ahrah. Ahrah is a talking sword that Dust uses for combat and listens to for advice on his warrior skills and regaining his lost past. Fidget also happens to be Ahrah’s guardian who agrees to journey with Dust. The story is set in an immaculately hand-drawn world that offers some real “wow” moments as you progress into new vivid and colorful environments. The story of Dust is funny, endearing, light-hearted, silly, serious, dark, engaging, and most of all extremely fun. 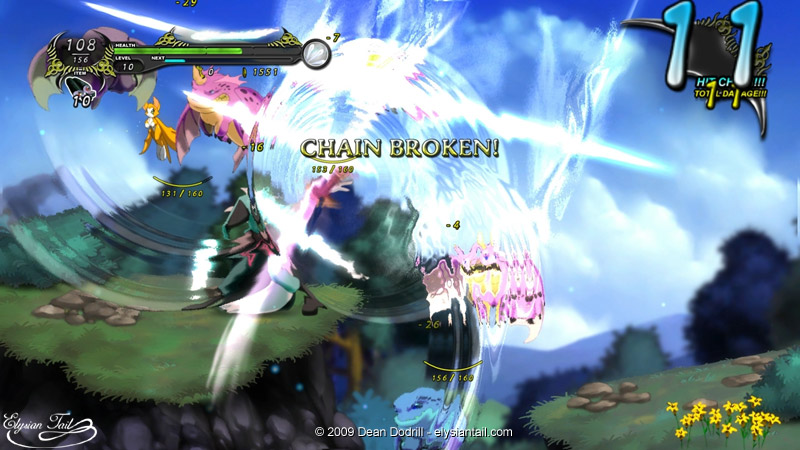 I am a self-admitted fan of hack-n-slash games, as well as action RPGs, and platformers. Dust manages to combine some of the best elements of all of these games into one cohesive whole that never dwells on one element for too long. Dust mixes up its various elements at a good pace. While you will spend the majority of your time fighting, the combo-based system of swordplay is very engaging and fun to watch. Dust is at his best when you’re surrounded by a horde of enemies and have to decide which attacks you want to use to clear them out. A personal favorite is using Fidget’s projectiles in conjunction with Dust’s spinning sword attack followed by launching enemies into the air and spinning through everything mid-air, cutting them down into the loot that falls back to the ground. Seriously, that never got old. The platforming is simple as well and reminds you that you need to think vertically, as well as horizontally.

None of the various elements of the game are very deep at their core. This may be off-putting to some fans who want a deep RPG system, but for what they are, they work extremely well. We have to remember; one man programmed and designed this game, not a team. That being the case, I’m surprised at just how deep Dodrill did make everything and how well it all works. Though the combo-based combat system isn’t as deep as other hack-n-slash games, the various hits you make do add up on a counter making you feel like a very powerful warrior. Every fight and every conversation earns you xp which can then be spent leveling up basic abilities like health, defense, attack or Fidget. Again, it’s not a deep RPG system, but it works.

The game does encourage exploration, but it also requires back-tracking. For some, this isn’t a problem. However, I am not the biggest fan of having to do that on a regular basis, and with Dust you will eventually learn new abilities or receive items that are needed to gain access to previous areas you had to pass up due to your previous lack of those abilities. The rewards are just okay too. But for those who can’t resist the call for more items to craft or sell, or more gold, you will want to retread old ground.

Each new area you progress to offers new enemies types and the game does a great job at mixing things up. You definitely don’t want to shy away from new enemies types because with them also comes new xp gains which you will need in order to level up for later sections. The boss battles were a bit of a let-down and I was hoping each new one would offer more challenge. However, they were fairly easy to get past without much strategy.

The world of Dust is literally hand-painted by a single artist telling his vision and story with vivid colors and varied locales. Each environment is beautiful to behold. None of it feels like 2D maps glued together, but rather feels connected into a whole that represents a very alive world. The sound design is well done too and the voice-acting is great for its style. 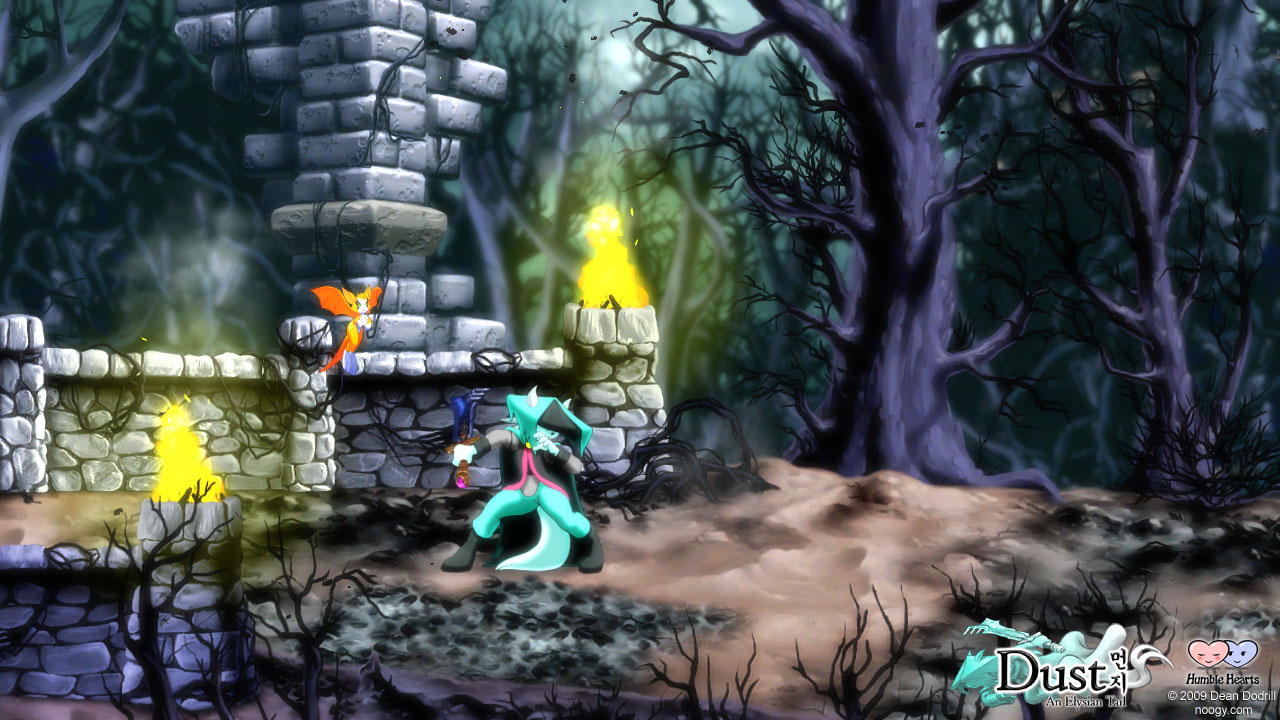 The overall art style is obviously animated and yes, the characters are all furries. I was a little put off at first by the cute little anthropomorphic characters, however as I began to focus on the game itself and became involved in Dust’s story, I quickly forgot about the speaking animals. As someone who is not at all a furry fandom fan, I can say that Dust leans more towards this as an art-style for its story and seems to have little if anything to do with the furry subculture, besides its aesthetic.

If you love beautiful hand-painted worlds, RPG elements, and combo based hack-n-slash swordplay, you will most certainly love Dust: An Elysian Tail. Though the flaws are there and at times somewhat apparent, the overall package is solid and will provide a great escape into a mysterious world. The story of Dust is often mistaken as a simple one. However, look deeper and you’ll quickly find that it turns into a tale of life, death, genocide, and redemption. For an Xbox Live Arcade title that is also a one man programmed 2D game, it’s an amazing achievement and often reminded me of why I enjoy playing games in the first place.

Error type: "Forbidden". Error message: "The request cannot be completed because you have exceeded your quota." Domain: "youtube.quota". Reason: "quotaExceeded".

Did you added your own Google API key? Look at the help.

Check in YouTube if the id gamingwithscissors belongs to a username. Check the FAQ of the plugin or send error messages to support.